Home Information The 150,000-square-meter sky bridge of Shanghai’s ‘Rafael Gallery’ will be covered in solar 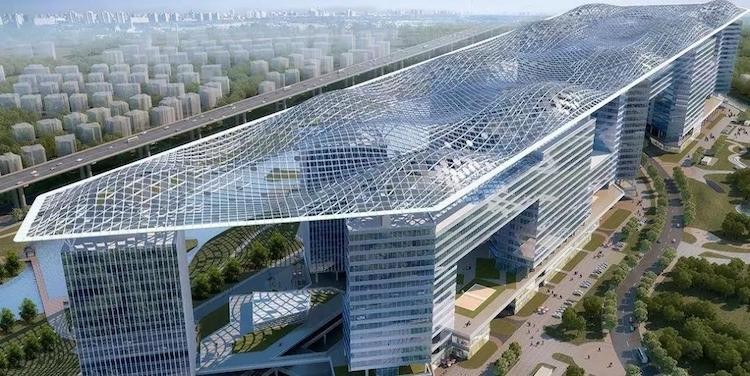 Solar company Hanergy announced that its thin-film solar modules will cover the 150,000 square meter roof of the ‘Rafael Gallery’ located at a Tech City in Shanghai.

Designed by architect, Rafael Vinoly, the ‘Rafael Gallery’ at Songjiang District of Pudong is a 1.5-kilometer sky bridge stretching across the top of over 20 skyscrapers, making it the longest urban industrial porch in the world.

Outlined with successive curves, elevation between highest and lowest points being 18 meters, and floating above buildings as tall as 80 meters, the sky bridge resembles a giant rolling cloud, looked from afar. With a roof of 150,000 square meters, size of nearly 20 soccer fields, and weight of 14,000 tons, it’s also the world’s largest aluminum structure rooftop.

The capacity of the solar on the roof of the Rafael Gallery is estimated to be about 1 MW in the first phase. Powering the 1.5-kilometer-long sky bridge, each 125-W thin-film module weighs 2 kilograms, and measures 2.5 mms thick.

Hanergy’s CIGS technology mean the panels offer better performance under weak light condition to efficiently generate power even in cloudy days, according to the company.

“The conversion efficiency of the panels on record is 18.5%, the highest among products of the same kind”, according to a technician in Dachang Mobile Energy Industrial Park, where the panels were manufactured.

The “Rafael Gallery” is expected to attract a cluster of restaurants, boutique stores, shopping centers and entertainment outlets, and serve as a base for high-end enterprises, corporate headquarters, luxury hotels, convention centers, etc. “It will become not only a new landmark of the city, but also a platform for high-end industries”, said a project director of Lingang Songjiang Tech City in Shanghai. The whole complex has already finished the first phase of construction and kicked off the second phase this year.

The “Rafael Gallery” is one of the key projects of China’s 13th five-year plan and supports the research for two of the national major topics by providing the data and spearheading the experiments for the study on renewable energy, large-scale application of BIPV products, optimization of multiple-format energy provision, and integration of CCHP and energy storage system.

Rendering of the Rafael Gallery buildings at night. Credit: Hanergy.