Home Information Envisioning the future of hydropower: What do you see? 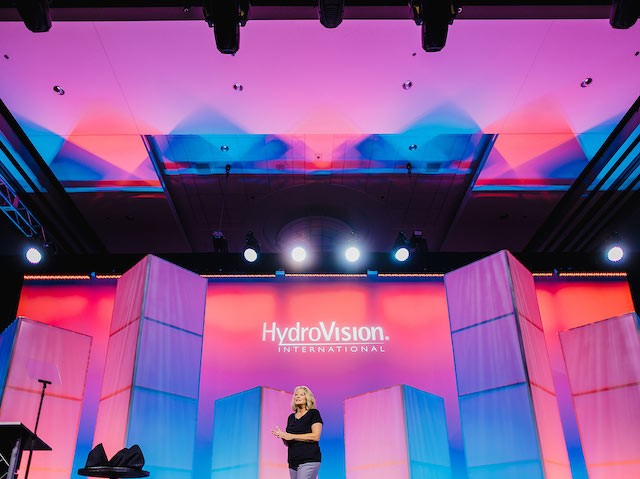 Marla Barnes, VP of HydroVision International speaks the keynote for the event.
zvxxueewzqcueedbfybaaftsvadrz

On Tuesday, July 23 at the HydroVision International keynote, Vice President Marla Barnes asked the audience to close their eyes and envision their next vacation. “Are you sitting on a beach? Are you packing your family into the car for a wild adventure? What do you see,” she asked.

After she told the audience to open their eyes, she said “we’ve all just envisioned the future and that’s what HydroVision International is all about.” She encouraged the audience to take risks by attending sessions that might be outside of their area of expertise and to consider what contribution they can make to help keep the hydropower industry vibrant.

Teresa Hansen, VP of Global Content for Clarion Energy took the stage next and explained that while she is new to the hydropower industry, the Dardannelle Lock and Dam on the Arkansas River played a large role her childhood as it is located in her hometown so she understands the important role that the technology plays in the U.S. and beyond.

Janet Harron, COO of Bonneville Power was the first keynote speaker. She stressed the importance of telling the hydropower story well. Bonneville Power created a video to help educate the public about the benfits of hydropower. (you can watch it below this article). She said thst hydropower is able to provide grid support to wind and solar, which are growing energy sources.

“We are looking at a world where hydropower has the winning combination because it is 100 percent carbon free and dispatchable,” she said.

Harron also stressed the importance of workforce development and how the new generation of grid and hydro operators will bring new ideas to the technology.

“They will operate the system in a way that people like my dad [who was a hydropower engineer] would never have thought possible,” she said, adding “What can you do to make hydro better for all of us?”

David Murray COO of Hydro-Quebec was the final keynote speaker. He began his talk by emphasizing the fact that the world is in a crisis. Tomorrow it will be 42 degrees Celsius in Paris, that’s 114 degrees Fahrenheit,” he said.

“What are we going to be doing in the future to fix a world that is talking to us?” he asked.

Murray then explained how Hydro-Quebec took a bold stance by investing in hydropower and transmission in the 1940s and 50s, building some of the most fascinating and powerful dams in the world and inventing the first 735 kV power line in the world to bring power to people located in remote areas of Canada.

Hydro-Quebec is 99 percent green energy today, he said, adding that the electricity rates are some of the lowest in the world at 7-8 cents per kWh, Canadian.

Marla Barnes concluded the keynote by urging the audience to take advantage of all that HydroVision International has to offer. Visit and talk with vendors about the solutions they might have to your problems, she said. Take risks, attend sessions, network.

“You all have a role to play in the future of hydro,” she said.